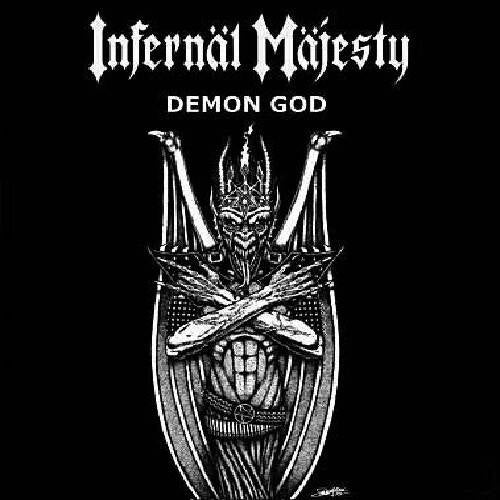 Before their second album ‘Unholier then Thou’, Infernal Majesty recorded a two track Demo in 1997. Only 4 or 5 of these demos were made for band and their management. Both songs were later released on "The Kanada Compilation" CD. The song “Is There a God?” was later renamed to “Where is Your God?. In 2006 INFERNAL MAJESTY recorded a 6 track ep called ‘Demon God’. ‘DEMON GOD’ was issued in CD-R format to coincide with a festival appearance in Calgary, Canada. Guest appearances on the DEMON GOD bonus tracks by Cannibal Corpse members George "Corpsegrinder" Fisher (vocals) and Rob Barrett on guitars (S.O.S.) and also features guest vocals by Chris Valagao (Zimmers Hole, Strapping Young Lad live) on the sixth track ‘Skeletons in the Closet’. All tracks are remastered at Suncord Audio lab by Achilleas Kalantzis (Varathron). The booklet contains many rare picture from the ‘Demon God’ era.