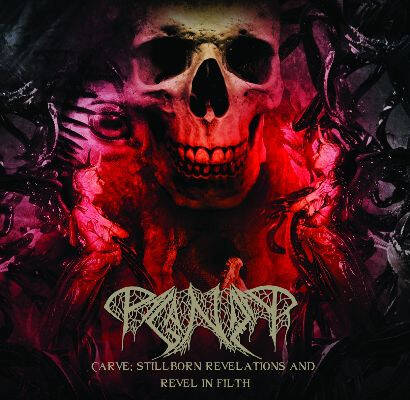 Carve is nothing more then a temporarily shape of Paganizer. When Paganizer was on hold for a brief period (2002), Rogga Johansson (vocals / guitars – also Ribspreader, The Grotesquery, Demiurg), Mate Fiebig (ex Paganizer, ex Ribspreader) and Andreas Karlsson (Paganizer / Another Life), recorded 2 demos and 2 albums under the monicker Carve. And quickly returnd to the name Pagainzer. The album ‘Stillborn Revelations’ was recorded in 2002 at Necromorbus Studios with Tore Stjerna (Watain, Scar Symerty, Desultory). Second album ‘Revel in Human Filth’ was released in 2004 and mastered by Dan Swano (Opeth, Bloodbath, Katatonia). Both album were released by an obscure Brasillian label and out of print for a decade. Now both albums are available on 1 disk, plus 3 exclusive bonus tracks, liner notes from Rogga and new artwork and booklet by Peter Sallai (Memory Garden, Bornholm).